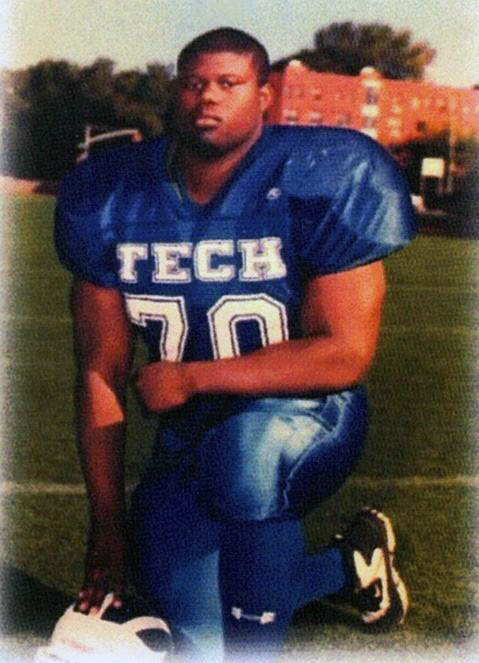 The son of Jae and Sylvia Tillery, Jason joined the BTHS football team in the spring of his freshman year, 2002, and saw his first game action that fall. Under HC Nick Lanza and Jason was allowed the opportunity to start learning the game, and with his teammates build the foundations to continue the Varsity success of the time. Jason played for Coach Jim DiBenedetto as a 2-year varsity starter at Center and NT, and Jason was a part of consecutive PSAL quarter-final squads that found their own ways to success. As center for the 2003 season, he set the tone at the line of scrimmage for a balanced Engineer offense that attacked teams through the air and on the ground. As a DL reserve he was privileged to be a part of one of the stingiest defenses in Tech Football’s past. The 2003 team finished 10-2 including a playoff win and preseason victory vs reigning NYS Section 4 champ Vestal for these teams, the “off-season” was another competitive season where the Engineers in the gym, and with speedwork in the halls of Tech; would challenge each other to push and become better under the strength/ conditioning direction of coaches Davis and Brown; the weight room is where Jason found a way to become a difference maker reaching the 1000 pound club as rising Junior, then improving to totals of 303 on the bench press and 560 on the squat as a rising senior. As a senior Jason was named one of three captains along with Mark Damon = Ernad Ibric. All three were key to an offensive group that made running the ball look easy with a season total of over 4,000 rushing yards and finishing in the quarterfinals at 7-3. For his efforts Jason was nominated for the Brooklyn All-Boro, and NYC all-city team. He was also invited to represent NYC vs LI in the Empire Challenge All-Star Game and represent NY State against NJ in the Governor’s Bowl for his last high school game.

Among offers and interest from colleges in the Northeast, Jason found a home as a Redfox with Marist College Football in Poughkeepsie, NY. The former Engineer instantly showed passion and detail for the game and was named the starter at Left Guard as a true Freshman; this was a position he would lock down with a career 44 consecutive starts from the 2005-2008 season. Over the 4-year span became a MAAC conference champion and was named to the conference all-academic team, while completing a Bachelor of Arts in Mathematics and Adolescent Education.

Jason transitioned in the spring of 2009 as an assistant coach during the Redfoxes Spring season, leading to an invite to join the coaching staff and the beginning of his transition from player to coach. He shuffled responsibilities as the team needed coaching RBs and the OL for 2 years before taking on a different challenge as a player/coach for the Aarhus Tigers of the Danish National League of football.

2011-15 saw many new opportunities as Jason continued in various roles as a player coach in the Danish, French, and German football leagues. Playing as an OL or D Linesmen became part of the duties that included coaching youth football teams within each of the 5 clubs during that span. 2012 was also a special year with a memorable season as part of the BTHS Football coaching staff and team that went 10-2. In 2019 Jason accepted the role as Head Coach of the Steelsharks Traun of the Austrian Football League. Jason is currently still doing football … Somewhere.